Overwatch: The Board Game

In Overwatch – the board game, players will take control of a team of heroes and try to defeat the other players team in a round of Payload.

SETUP
Place the round marker on the space on the board, numbered “1”.
– The players take turns placing terrain of their choice anywhere on the board. The terrains edges must not cross edges of the hexes. Terrain can not be placed on the payloads route or in a player’s spawn point. When both players have placed 4 pieces of terrain move to the next step.
– Starting with the defending player both players will then draft heroes. Shuffle the hero sheets, deal 5 of them to the defending player and 4 to the attacking player.
– Each player chooses a hero and then passes the leftover sheets to the other player. Repeat this until both players have 4 heroes.
– Each player places all of their hero sheets in front of them, takes all associated tiles listed on their sheets and places cubes equal to the number in parenthesis on their heroes Ultimate ability in the lower right corner of every hero sheet (This shows that the ability needs to cool down before use).
– The defending player chooses which spawn point she wants to use. Both players then put their hero-tiles on any hexes in their respective spawn points. A hero can never share a space with another hero.

The attacking player(s) starts the game.

TURN ORDER
On the first turn of the game – skip numbers 0 and 1 from the turn order.

0. (only on attackers turn) Move the round marker one step to the right.
1. Cool down used skills. On each ability with at least one cube on it -remove one cube.Do not do this to heroes who are (temporarily) off the board.
2. Remove the active players temporary tokens from the board. All effects with an “at the beginning of your next turn” are now over for the active player.
3. Activate heroes. The player activates her heroes either until she is all out of movement, abilities and weapons to activate or until she has reached a point where she doesn’t want to do any more actions.
4. Re-spawn fallen heroes – The active player returns all her defeated heroes to their spawn-point.
5. move the payload and check for met win conditions. The Payload will move as many steps towards its goal as there are attacking Heroes in the spaces adjacent to it. If there are any defending heroes in any of the spaces adjacent to the Payload it will instead move towards its starting point in the same manner, but never past any checkpoints or the starting point. If both attackers and defenders are adjacent to the Payload it is considered contested and will not move at all. After that is done, check for win conditions. If no one has won the game the next players turn begins immediately.

PLAYING THE GAME
On a players turn they can activate every hero as many times as they wantt. Every hero can move and use every available ability as much as they like as long as they have enough speed and abilities to do so. However, heroes can only use one of their main weapons once each turn. Heroes can reach points when they simply run out of actions. Heroes do not have turn orders meaning you could for example activate an ability with Reaper, then move and attack with Mercy and then move with Reaper followed by an action by another hero before Reaper does his attack – and so on.

MOVING
On your turn you can move all of your heroes up toas many spaces as they have Speed noted on their respective Hero Sheets. Movement can be interrupted (for an attack or ability) and resumed as many times as you like during a turn.All Heroes can move up one level and down any number of levels without any penalty.

ATTACKING
(activating main weapon) A Hero can only activate one of its main weapons once each turn. as long as both the attacking and the attacked players are on the same level of the playing board the attack is considered a normal attack and the damage dealt is clarified in the hex grid next to every weapon on the Hero Sheets.

ADVANTAGE
When a hero attacks it is considered to be at an advantage if it’s standing on a higher level than – and has a clear shot of – the attacked hero. The height difference doesn’t change the range of the weapons but the weapon always deals maximum damage (e.g. using Pulse Pistols, Tracer always deals 300 damage to a hero if Tracer is in advantage.

DISADVANTAGE
When a hero attacks it is considered to be at a disadvantage either if it is standing on a lower level than or has a semi blocked line of sight of the attacked hero. When at a disadvantage an attack always deals its lowest possible damage.

Measuring RANGE
Next to most abilities and attacks a small hex grid can be seen explaining the range and damage of the weapon or ability. For example, Tracers Pulse Pistol can deal damage to an enemy within four spaces from her position – and as long as she has a clear shot of an enemy on the same level as her, the following is true: the closer the enemy is to her, the more damage she deals. The damage difference can also be seen in these hexes and varies greatly from hero to hero. When measuring the distance between heroes simply count how many hexes are between them. It is not important whether or not there is a straight line of hexes between the heroes.

USING ABILITIES
A player can activate any number of her heroes’ abilities on her turn (unless specifically stated otherwise) with the restriction that as soon as an ability is used the controlling player places cubes on the ability and it is considered exhausted until all the cubes have been removed, meaning each ability can only be used once.

Activated Abilities
All of the Abilities with a number in a parenthesis next to its name are known as activated abilities. An activated ability can only be used (or activated) once before being exhausted for a number of turns equal to that number. The time it takes for the cubes to be removed from the ability is known as a cooldown.

ABILITIES WITH RANGE
If an attack or ability has“Range” printed next to it, it is a volleyed ability. This means that the attack can be targeted behind another hero or behind an obstacle. in the chosen hex the Area of effect showed next to the ability has its center.

OVERWATCH
Any heroes that haven’t attacked or used any offensive abilities during their current turn can always be set to overwatch. When setting a hero to overwatch put an overwatch-token next to it on the board. This token is removed at the beginning of the active players next turn or when the activated hero is defeated. As long as a hero is in overwatch it will automatically shoot any number of enemies moving into its range and line of sight once. It will deal its disadvantage damage to the targeted enemies.

THE HERO SHEETS
SPEED: Is the number of spaces the hero is able to move each turn.

HP: Is the amount of damage the hero can take before it is defeated and needs to re-spawn. loss of hp is tracked by moving the attached paperclip to the left. Every hero starts with a paperclip in the top right corner of the Hero Sheet meaning they have full health.

WEAPONS: No matter how many weapons a hero has it can only activate a main weapon once each turn. When activated it deals damage according to the attached grid to its target. Its range and damage is specified on the small hex-grid next to it. The damage falloff noted on the grid is used when the attacked hero is on the same level as Tracer. The numbers in the hexes are the same used when taking Advantage and Disadvantage in consideration. E.g. Tracers Pulse Pistol will deal 300 damage to any enemy targeted when she is in advantage and it will deal 50 damage to any targeted enemy when she is in disadvantage no matter the range.

ABILITIES: When an ability is used it needs to cool down before re-use. For example: Tracer used Blink (2) this turn. The controlling player then puts cubes equal to the number printed next to the abilities name on the ability. It will be usable again when all the cubes have been removed.

In the making and playtesting: 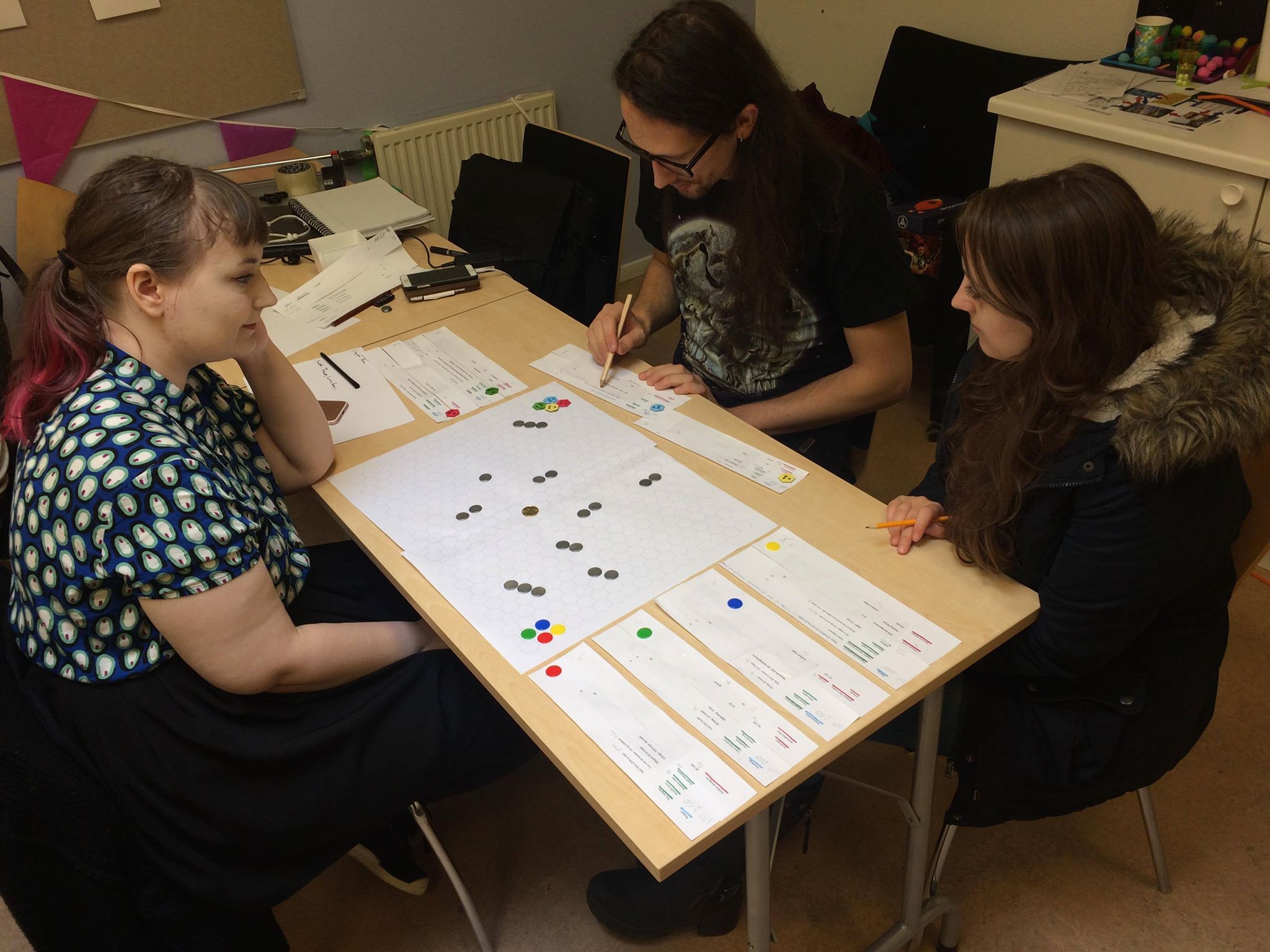 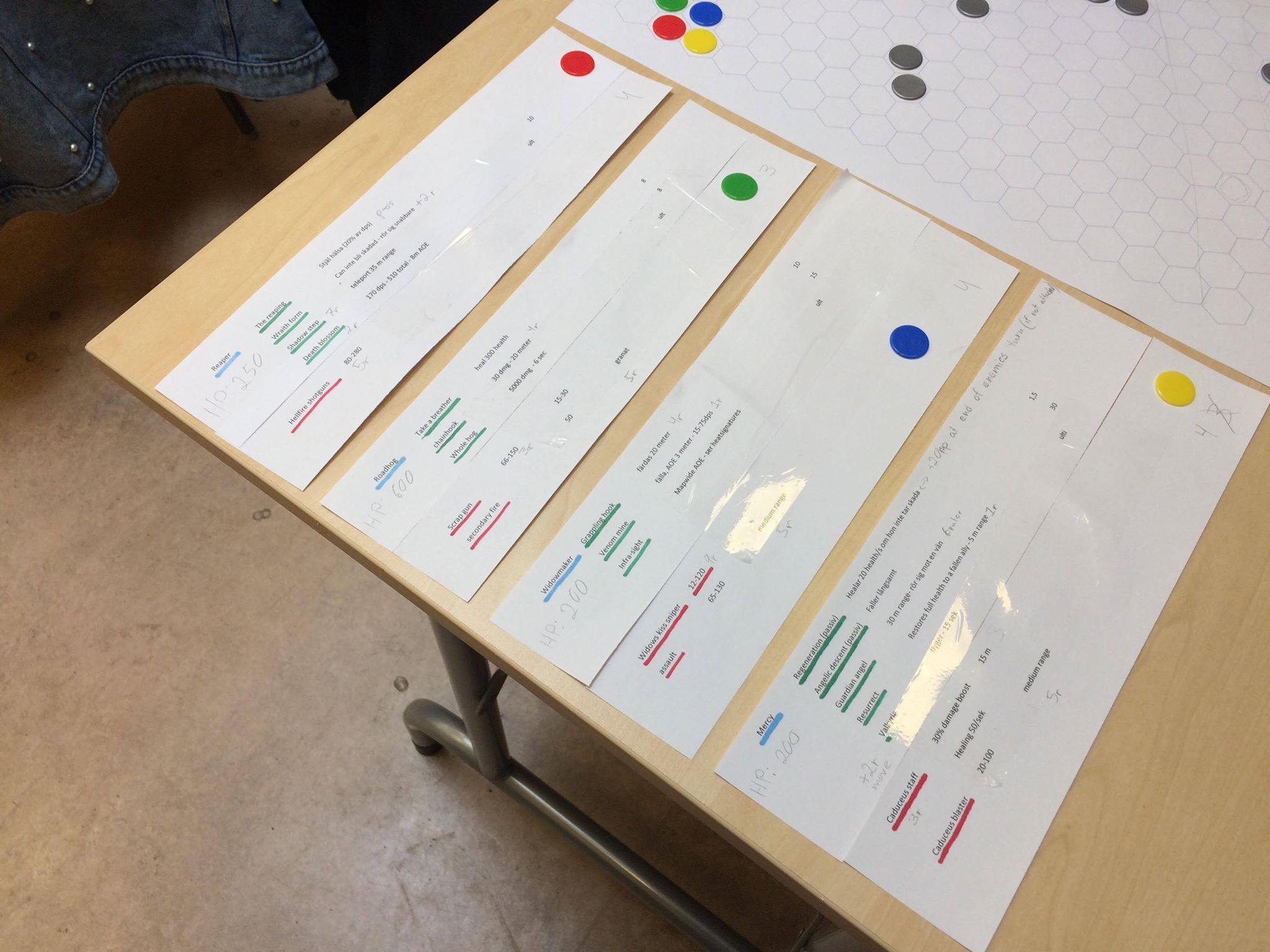 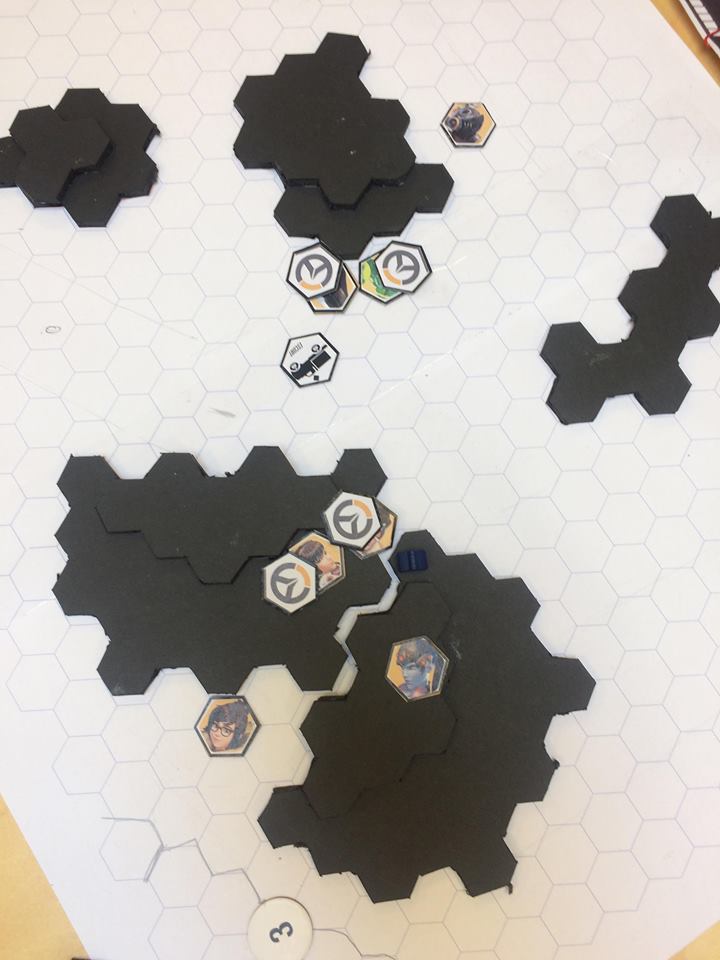 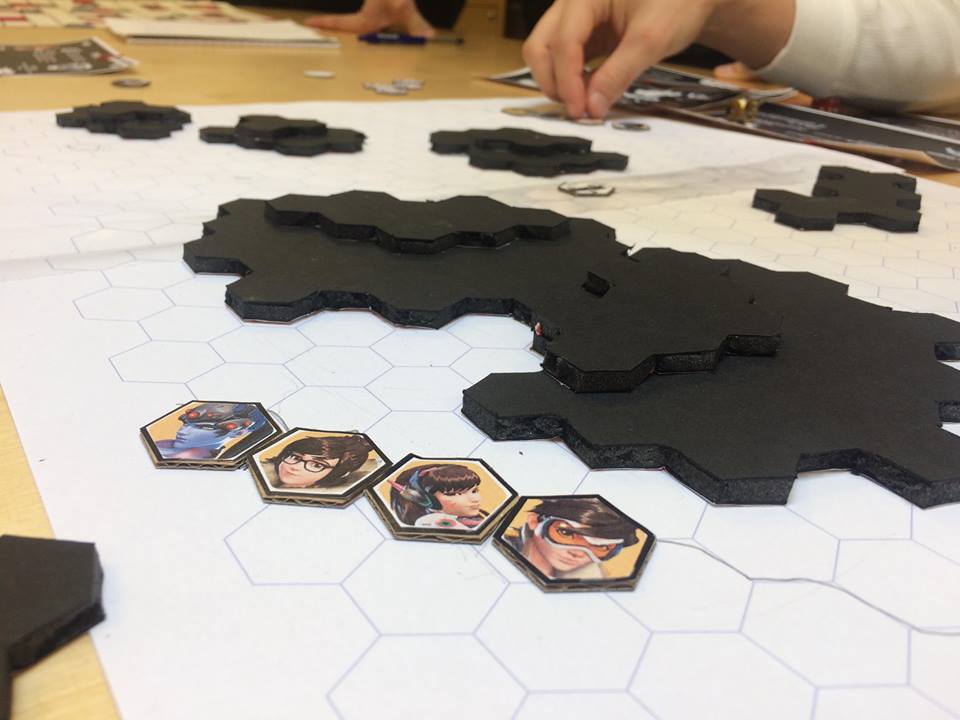 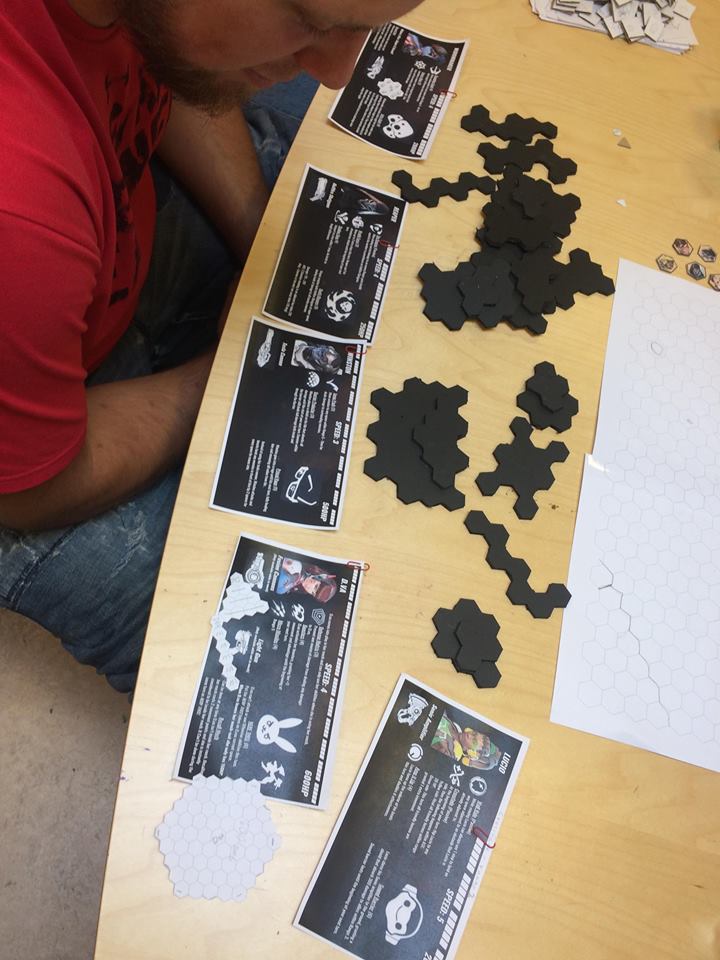 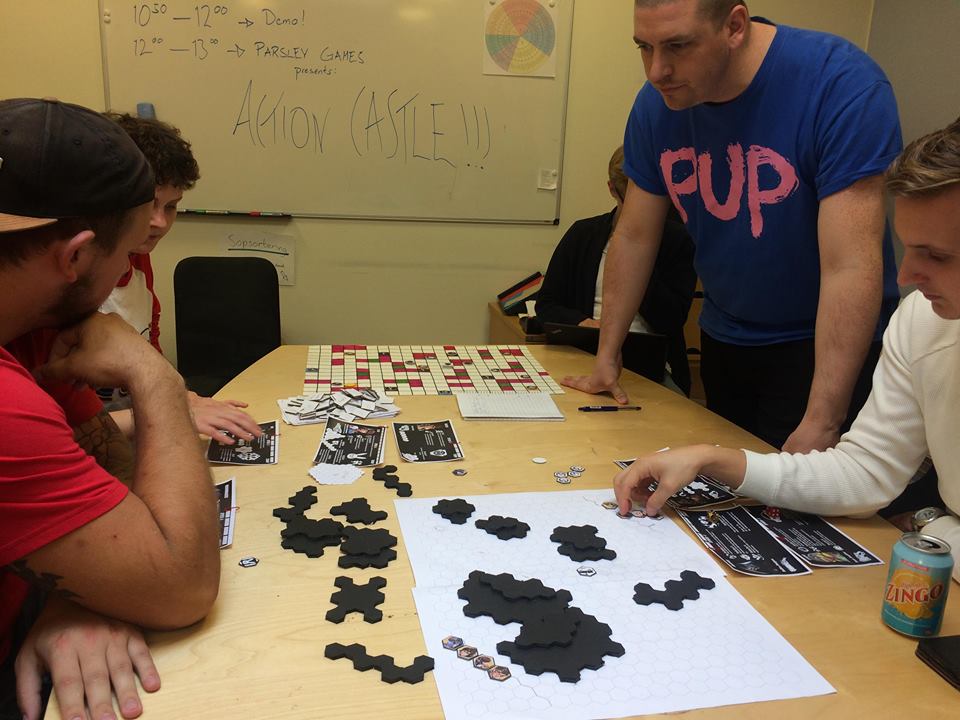 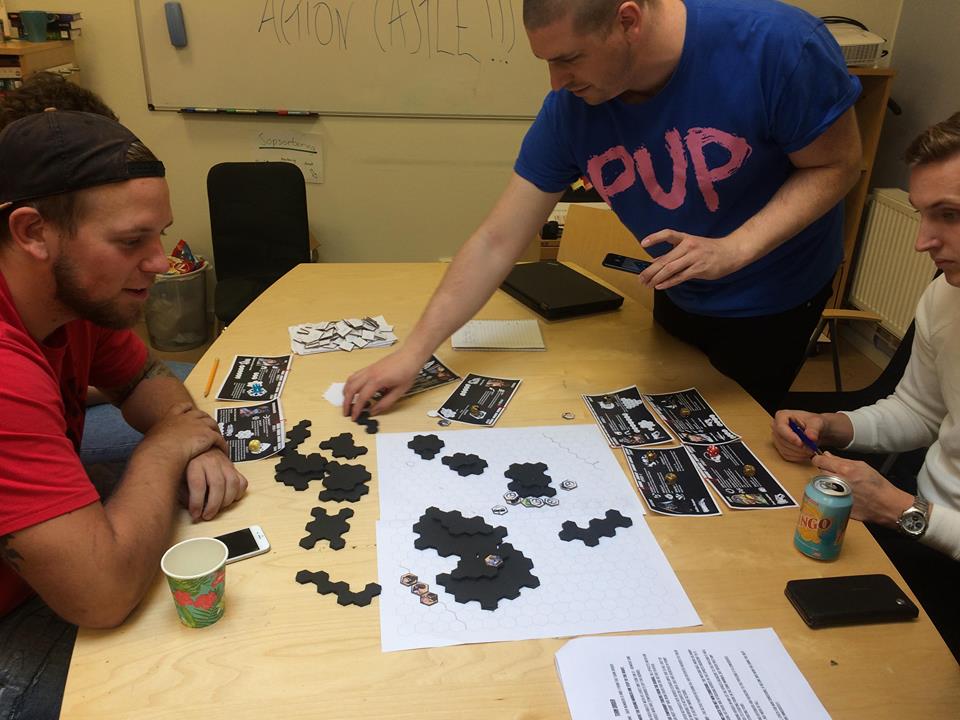 2 examples of what the character sheets looks like, (there are 7 more). 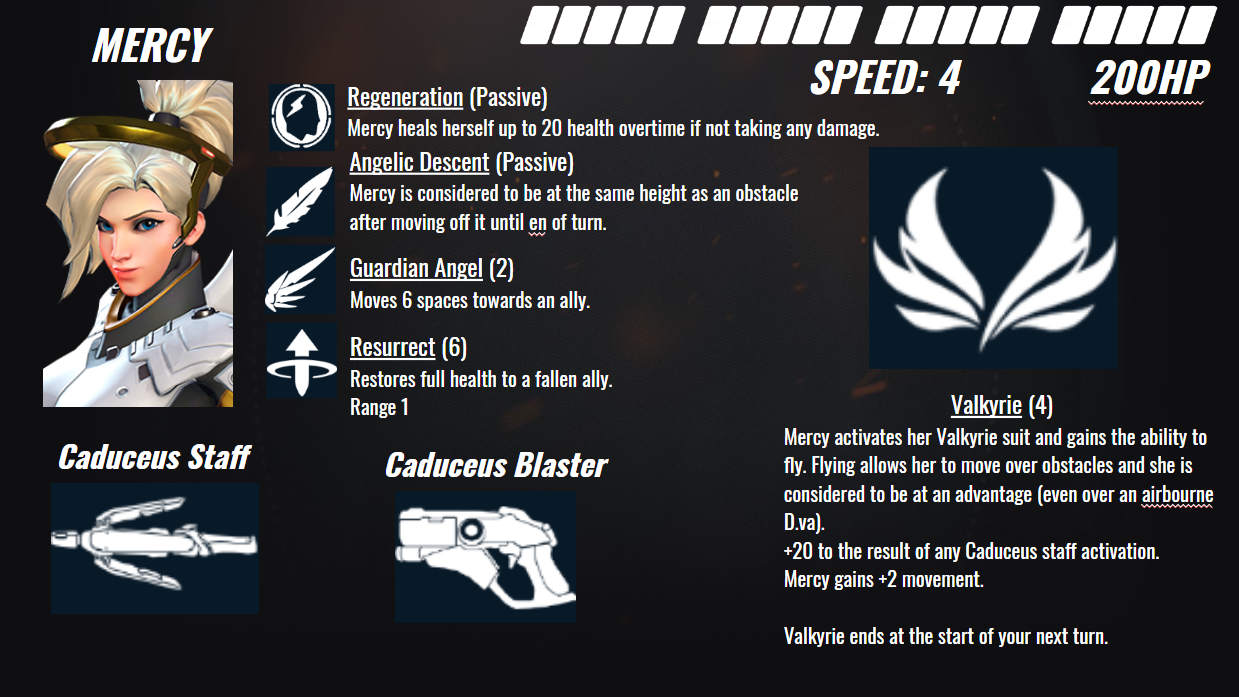